Adapted From A Sesquicentennial Salute By Mary Grace Curry, Ph.D. 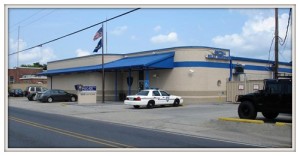 Prior to the incorporation of the Village of Gretna in 1913, the Jefferson Parish Police Jury provided policing to the expanding west bank river front communities. By 1877, it became necessary for the Jury to appoint a “police force” for service throughout the Parish. The first “Regular Parish Police Force” consisted of one chief or captain, and three patrolmen. Wishing to have the force become active and effective immediately, the Jury decided that the force should be governed by the New Orleans Police Department rules and regulations.

On its own in 1913, one of the first ordinances adopted by newly incorporated Gretna was ordinance No. 12 on September 9, 1913. That ordinance created a police board, defined it’s duties and regulated the employment of police and provided for their suspension or discharge.

The first town marshal was Peter (Bushy) Leson. Leson was the founder, owner and operator of the successful Leson Chevrolet distributorship, located for many years in Gretna. The second and third pioneer marshals were Peter Troulliet and Arthur (Buck) Sartis, respectively. The fourth marshal was Beauregard H. Miller, Sr.

With few exceptions, since 1925, the history of law enforcement in Gretna has clearly paralleled the lives of the Miller family. In 1925, while Jefferson Parish was busy celebrating its centennial anniversary, Beauregard H. (Burry) Miller, Sr., was launching an era of Gretna law enforcement unparalleled in Louisiana history. At age 26, Miller Sr. was elected (June 11, 1926) Chief of Police and began a 53 year career which ended with his death on April 2, 1979.

By 1975, when Jefferson Parish was celebrating it’s sesquicentennial and Miller Sr., was celebrating his golden anniversary as Gretna’s chief law enforcement officer, the Gretna Police Department had grown from Miller, Sr’s one man operation to 34 full-time policemen, a detective bureau, a canine corps, and ten squad cars.

The fifth police chief was Beauregard H. Miller Jr. Shortly after the death of his father, Miller Jr. resigned his position of 21 years on the Jefferson Parish Council to accept the position vacated by his father. Miller Jr. was appointed by the Gretna Board of Aldermen to fill an interim term. Later, in an election on October 27, 1979, Miller Jr. was officially elected to fill the position of Gretna’s Police Chief. On July 22, 2000, the City celebrated a Chief Miller Diamond Jubilee Celebration, marking 75 years of law enforcement by the Miller family. Chief Beauregard Miller, Sr. served as marshal and Police Chief for 54 years, and by 2005 Chief B. H. Miller, Jr. had served for 26 years .

The sixth and current Chief of Police is Arthur S. Lawson, Jr. Chief Lawson was elected in 2005 and has since served proudly the citizens of the City of Gretna.